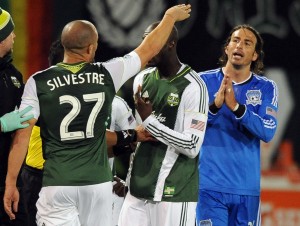 Gordon Reid is a football agent (soccer to Americans) for Premier Sports Management international (PSMi). Having starting in the finance industry, he has now been working in the field for 5 years. PSMi represents both players and coaches, but that’s not the only business they do. They are also working on behalf of football clubs in helping them sell and buy players, and work with agents across the globe in finding homes for their clients. The company has worked with many high profile players including Mikael Silvestre, Charlie Adam and Gary Cahill. On top of this, they have worked with powerhouse clubs including Manchester United and Juventus. They take pride in their clients, and have a great stable of both established internationals and those just starting their careers. I had the opportunity recently to speak with Gordon and he has given a fantastic view into the football representation business.

Chris Lesley: How did you get into the business?

Gordon Reid: I was previously in the financial field, and like a lot of people was doing a job that I was good at but didn’t necessarily love. I had a chance meeting with a successful agent called Sky Andrew who has represented some very famous footballers and talking to him, I realised that’s exactly what I wanted to do until the day I retire. I spoke to a number of the “big” players in the representation field and was offered jobs but I went with my gut instinct and decided against taking them up on their offers. I then spoke to the CEO of the agency I’m still with to this day. It’s a boutique agency and has fantastic clients and a great reputation but more than anything, I just had a good feeling about them. I was going to be hands on from recruiting, liaising and the glory part…getting the deal done. That’s what I wanted, a good schooling and not just get the glory without putting any hard graft into earning it.

Chris Lesley: Why did you get into the business?

Gordon Reid: I got into the business because I wanted to do something for the rest of my life that was my real passion. I am paid to watch football and make sure the talent of today and tomorrow do things the right way, on and off the park. I don’t see it as work, I see it as my hobby, that I am grateful to do for a living and I wake up every morning knowing I have the best job in the world. I’m not saying there’s no stress or difficult moments, because there are plenty, but at the end of the day doing something you love makes you give that extra 10%.

Chris Lesley: How did you go about obtaining your first client?

Gordon Reid: My first client was a highly-rated young striker that played for a team in the English Premiership. I was very aware of him and luckily knew someone that knew him and they managed to get me his number. When I made the call he was actually on the team bus coming back from a game so he had a little time to kill. I started the conversation by telling him how much I admired him as a player and that I’d like the opportunity to have a meeting regarding me representing him. He agreed and I met him and his father at a hotel near Birmingham for lunch. In that first conversation I had to also see if he was currently represented as within FIFA laws, you cannot meet a player that is currently represented by another agent, unless they are in the final 30 days of the maximum 24 months allowed to be singed to an agency. It was a great first meeting. We talked for a few hours about his career to date, his aspirations for the future and also what I could do to help him along. It was pretty informal and a good way for us to gauge each other as people and to see if we could possibly work together. I left him and within 48 hours he called to say he would like to work together, which was great news.

Chris Lesley: Talk us through your first playing contract negotiation.

Gordon Reid: My first contract negotiation was for the same player. Around 2 months after he signed to us, I got a call from him saying his manager had called him into his office and wanted to offer him a new contract after a spell of very good form. He passed on his manager’s number and I made the call which he was expecting. Now, with being very new to the industry I was very keen to start building relationships and getting to meet managers/head coaches in person rather than a very impersonal phone call, so I suggested travelling down to the training ground to have a conversation, something that he was grateful of. The meeting was very worthwhile; not only did it show our intentions for my client to remain at the club but it showed that building a good relationship was paramount to us. We chatted about my client’s form of late and the clubs vision and intentions for him in the future. After this conversation I went into a meeting with the Director of Football where we talked about the financial package and although it was my first meeting in such a scenario, I felt very comfortable and kept reminding myself that they were the ones trying to sell themselves to me and my client, which made things easier. Overall the whole process from the first call to signing the contract was around 3 weeks which in football is very quick indeed.

Chris Lesley: How competitive is it in football representation? How do you separate yourself from the competition?

Gordon Reid: When I got into the industry it was very competitive, but over the last 2 years it has got even more so. In saying that, it’s not something I’m overly concerned about. Anyone can represent an athlete, whether it be a footballer, tennis player or track athlete, but the key is reputation and not only maintaining it, but building on it. To separate myself from the rest I keep my clients happy with endorsements, contracts and advice; they go a long way to building the reputation. I’ve gained a number of clients due to the good work I’ve done with their teammates. I’m not the type of agent who will all of a sudden appear when there’s a payday around the corner. I keep in almost daily contact with my clients and regularly meet them for meals and catch-ups. That personal touch goes a long way! If you’re going to talk the talk, you have to walk the walk. Just be real. Footballers get a lot of people approaching them and believe it or not, they can see through someone that’s full of empty promises.

Chris Lesley: What does your normal day entail?

Gordon Reid: The beauty of my job is that no day is the same, so I wouldn’t say I have a “normal” day. First thing in the morning, around 7am, it’s going through emails, voicemails & texts I’ve received overnight. From then on the day will consist of catching up with my clients, either on the phone or in person – speaking with journalists, scouts, Directors of Football, CEO’s, sponsors. With my job being in the sports industry, I spend a lot of time taking in games in person from U16 to when the players turn professional to full club sides. I usually cover 6-8 games per week and often 2 or 3 a day if possible on the weekends.

Chris Lesley: What do you believe is the most important aspect of being an agent?

Gordon Reid: That’s a tough question as there are so many important aspects that go into making a good agent, but the main one’s I’d say are honesty & hard work. You have to be honest with your clients and I pride myself on telling them what they need to hear and not what they possibly want to hear. Giving them false hope or failing to keep them grounded, whatever the age, is something that cannot happen. In this job you can do a lot to make your own luck, and really immersing yourself 100% goes a long way to being successful.

Chris Lesley: Do you consider social media a help or a hindrance to your business?

Gordon Reid: On the whole it’s a good thing but social media is so prevalent these days, it can also be dangerous. I would say 80-90% of my clients use some form of it and I think it can be beneficial in linking them with fans, but on the flip side of that, if them or their team hasn’t had the best of games, fans aren’t always slow in getting their feelings across. With regards to the business, we don’t use it in a big way. I like to think the best agents are the ones that go around doing their job quietly and are not heard from every day. We have a Twitter account but it’s barely used to be honest.

Chris Lesley: Where do you see yourself and the industry heading over the next 5 years?

Gordon Reid: That’s a hard one to answer. It will for sure be even more competitive, especially since there is so much money in the game at the moment. You find now players being represented that never would have 4-5 years ago, purely because the the industry is saturated with too many agents looking to make a quick buck and they’re targeting clients that have no real ability or longevity and are promising the earth.

Emerging markets such as China, Japan, Australia, Arab States and even the MLS will be getting bigger and more influential in the world game.

The woman’s game is also getting bigger, and while it’s a million miles away from the men’s game, its growing all the time and I can see this continuing. We only represent one girl at the moment but open to more in the future.

For myself I will for sure being giving my clients the best possible advice and knowledge in helping them towards long and successful careers. Where I will be, who knows?! Moving to one of the big companies does have it’s advantages but I feel working for myself and doing things that I feel are the right way could be the way to go. Exploring some avenue’s with my interest in Lavner Camps, a very successful Summer Camps company based in the Philadelphia area is likely but only time will tell.

Chris Lesley: What advice do you have for those looking to enter the representation field?

Gordon Reid: When you have built your reputation and client base it’s great, but to get to that point you need to be prepared to put in endless hours of hard work and dedication. You will get doors slammed in your face but that’s all part of the job. Like I say to my clients, a successful career isn’t determined by how much money you have in your bank when you retire; you want to have cabinets full of trophies, awards and international caps. If you have those, the money will follow. I see my job similarly, I feel a great deal of pride and satisfaction when my clients win accolades and get recognition, I only get those players by putting in the hours and graft.